A New Agenda for Urban Psychology: Out of the Laboratory and Onto the Streets

Colin Ellard
Urban Realities Laboratory, University of Waterloo, Canada and Fellow at the Centre for Urban Design and Mental Health
Sustaining a successful life in the modern city is a psychological conundrum.  We possess minds that, according to extrapolation from the brains and social lives of our closest cousins, are optimally designed to keep close track of about 100-150 other individuals (Dunbar, 1992), and yet we must find a way to thrive among a sea of strangers—sometimes millions of them.  This basic condition of urban life is likely one of the key drivers of the higher incidence of psychiatric disorders, such as depression, anxiety and even psychosis among those who live in cities.  Studies of the brains of urban residents have begun to zero in on the possibility that one of the root causes of such disorders may be the stresses exerted by lives lived in high density among people we do not know well (Lederbogen et al, 2011).

Unless we propose to redistribute the global human population into large numbers of small villages, there is no true remedy for the root condition of urban life, which by definition involves a mismatch between the biological capacities of our minds for processing interpersonal information and the modern requirement that we live closely with enormous numbers of strangers.  On the other hand, there is great scope for the possibility that a well-designed city may mitigate the stresses engendered by density through the provision of good psychological buffers.  Indeed, one may think of urban design as a kind of psychological prosthesis that permits us to thrive under what is for the human species a very unnatural condition.

In the Urban Realities Laboratory at the University of Waterloo, our mission is to explore the connection between individual psychology and urban design in order to elaborate the principles that might contribute to psychological resilience and wellbeing in the urban environment.  In some ways, the idea that psychological principles may be brought to bear on the relationship between minds, brains, and the organization of the environment is not a new one.  The discipline of environmental psychology, which began to cut its teeth in the later part of the 20th century, was born of exactly such motivations.  What has changed in this century though, is the availability of new analytic and experimental methods that were simply not available to earlier researchers.  These methods make possible sophisticated experimental approaches to the big questions in urban psychology.

In our laboratory, we have focused on two different approaches. In the first, we have taken advantage of the recent revolution in technology and software for the production of high-immersion virtual environments.  The revolution began in earnest about 20 years ago with the emergence of head-mounted display technology that could be driven with ordinary desktop computer hardware. This brought the methods of virtual reality within the grasp of many modestly funded laboratories.  The revolution continues now with the advent of inexpensive consumer-grade technology for immersive virtual reality that, in some cases, is of good enough quality for use in research laboratories.  Such technology makes it possible to produce compelling simulations of lived spaces at every scale from the interiors of rooms to urban streetscapes.  In our own work, we have begun to use such simulations to explore the influence of spatial grammar and legibility at urban scale on the psychological state of urban wanderers (Barton et al, 2014).  We have found, for instance, that the intelligibility of a layout of streets influences not only the likelihood that someone wandering a streetscape may become disoriented but also their levels of stressful arousal and cognitive processing during such experiences.  In other work currently in progress we are exploring the manner in which the design of street-level facades influences the human perception of complexity, interest and pleasure.  The value of using an immersive environment to disentangle such a mix of variables lies in the possibility that we can move beyond the tradition of environmental psychology in which people are simply asked to rate pictures of environments, both real and fabricated, to experiments in which it is possible to measure more full-blooded behavioural responses to streetscape designs. 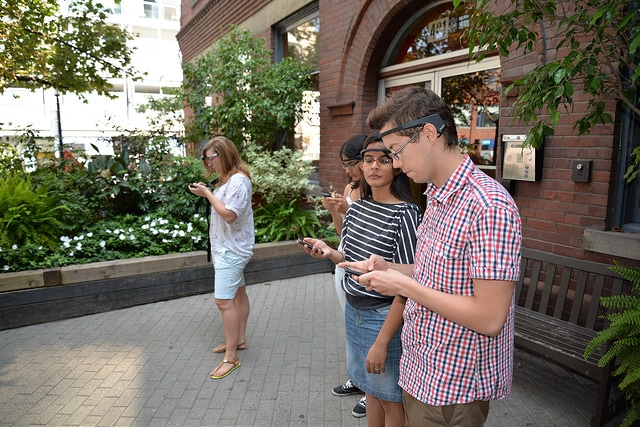 Participants in a field experiment exploring psychological responses to place.  These participants are wearing either headbands that measure simple EEG or eye-tracking glasses.
As compelling as the findings from studies using virtual reality have been for us, we have often found ourselves dissatisfied or even sceptical about the extent to which the psychological response to a simulated design, no matter how artfully created, might predict behaviour in real-world settings.  In VR studies, we are parachuted into place without context.  We only experience a limited palette of the full emotional response to places that come from actually being there, even if the only reason for that might be that we always know that we are in a simulation.  For these reasons, we have developed an ambitious protocol for testing the responses of human participants to experiences of real places in field settings.

This work, as a part of the program that we have called Psychology on the Street, began in modest fashion with a pilot project sponsored by the BMW-Guggenheim Laboratory on the streets of Manhattan’s Lower East Side.  There, we invited participants to take a one-hour walk with us, during which time we had them carry smart phones that were specially programmed to ask them questions about the locations we visited during the walk.  In addition, we had participants wear bracelets that were designed to measure their skin conductance—a simple but useful measure of physiological arousal.  The sites on the walk were chosen carefully to correspond with some of the same urban design variables that motivated our laboratory work.  We compared locations that were very low in façade complexity with those that were more open and complex.  We compared high and low vehicular traffic locations.  We looked at the mitigating influence of urban greenspace on psychological response to place.  The experiments in Manhattan, and our follow-up investigations in Berlin, Mumbai, Brooklyn, Toronto, and Vancouver, have been fraught with the typical harrowing problems of any kind of fieldwork.  We have had to cope with pouring rain, scorching heat, unexpected construction projects, street closures, hecklers, and even participants so enamoured with some of our chosen study locations that they’ve wandered away from our experiment in search of a good meal or a cocktail.  In other words, what we encounter in Psychology on the Street is an exquisitely accurate reflection of real life in cities. In spite of the everyday setbacks of such work though, we believe that the data we have collected have been of tremendous value in understanding how the urban terrain influences psychological state.  Several key findings, reported in preliminary form have captured our interest: 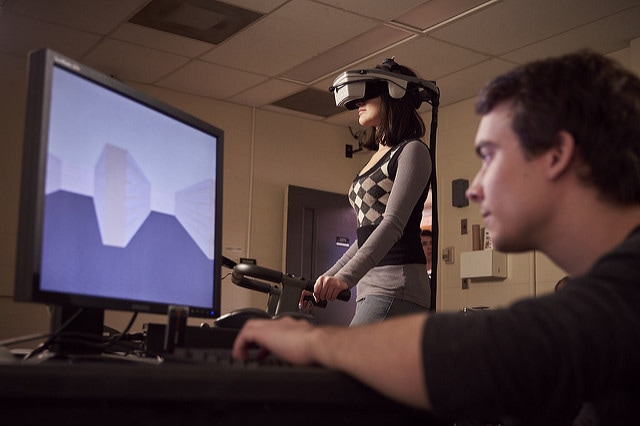 A participant in a virtual reality study examines a virtual interior with a low-complexity façade.
These findings, though not always necessarily surprising or unexpected, demonstrate good proof of concept for the approach that we have pioneered in which we combine biometrics, cognitive testing, and simple tools of self-assessment to develop richly detailed portraits of psychological responses to place.  And just as our work with simulations has been advanced by the wide availability of good tools in the consumer marketplace, our fieldwork has been similarly advanced by an explosion of interest in wearables that make possible the measurement of many physiological values of interest.  It is now easily possible to measure cardiac values such as heart rate variability in mobile participants, but we can also assess gaze patterns using mobile eye tracking equipment and patterns of brain activity using simple EEG headbands.

Our most recent study was conducted on the streets of Vancouver in collaboration with Happy City, Modus, and the City of Vancouver.  The study took advantage of a convergence of urbanists coming to the city to participate in several different conferences.  Among our more surprising preliminary findings from the work in Vancouver was the suggestion that simple, low-cost interventions in cityscapes might have a mitigating influence on psychological responses to place that resemble the well-documented influence of urban landscape architecture.  Though our analysis of the findings from this recently completed study is only just underway, hints from early results offer the tantalizing promise that it might be possible to measure the psychological impact of even subtle changes to the urban landscape on perception and mood.  If borne out, such effects will surely show follow-through to larger variables of interest to cities related to psychological resilience, feelings of well-being and, ultimately, to public health variables related to the vexing mental health issues presented by dense cities.  Although our research to date has focused mostly on the influence of “hard variables” related to the design of cities—facades, transportation networks, and urban landscape architecture—one of our most important general findings has been that all such variables can exacerbate the stress points of urban life.  Not only are these stressors likely to influence our general state of health but, because they influence our emotional state, they will affect how we behave among strangers, how much we trust one another, and how much we feel that we can rely on a network of social support among a sea of strangers.  Such interpersonal variables, inextricably linked with our emotional states in the moment, will surely affect individual mental health.

In summary, we at URL, along with the small but growing community of researchers are becoming interested in the use of biometric and psychological analysis to build better cities, and are strong advocates of a field approach to urban psychology. The approach is grounded not only in the traditional methods of psychological field work such as self-assessment measures and close observation of overt behaviour, but also in the newly emerging opportunities to measure physiological responses to place using unobtrusive but powerful wearables.  Such methods can help bring important findings out of the laboratory and onto the streets where, though experimenter control may be less than optimal, ecological validity is high.  The further promise of such methods is that they can be used to go beyond the high theory of environmental psychology and into the world of application in which a robust toolkit can be applied to a wide variety of vexing problems in human-centred urban design.  With an explosion in urban population growth, and issues in global sustainability that are close to a tipping point, there has never been a more urgent need for the intelligent application of psychological research methods to urban design. The tools are now at hand for the work that needs to be done, and a growing community of scholars and practitioners are beginning to seize the opportunity to contribute to the psychologically sustainable city.