Mental Health Suffers When We Surrender to Car Culture

Paul Mackie
Mobility Lab, US
Maria Hernandez, from Montgomery County, Maryland was always afraid she wouldn’t know how to use public transportation. But since deciding to learn, she rejoices in being “able to relax, read a book, and enjoy the scenery – which you really can’t do when you’re driving.” No doubt Hernandez is onto something that has been very difficult for most throughout the U.S. to muster since the auto industry began seducing us into its lifestyle nearly a century ago.

Of all the many things we surrender when we commit to making most, or all, of our trips by car, the most important may be the most difficult to measure: our mental health. Mental health, our state of well-being in which every individual can realize his or her own potential, allows us to cope with the normal stresses of life, work productively and fruitfully, and make a contribution to our communities. When mental health suffers, the damage can manifest in many ways, from depression to eating disorders to suicide. But our transportation habits – formed long ago but with endless opportunities to change– is one of the greatest tools we have to make sure our mental health remains sharp into old age. We can walk or bike to places and – bingo – that offically counts as regular physical activity. That means these behaviors are associated with improved attention, memory, and cognitive speed across our lifetimes.

What does the research say?

While numerous studies have documented the effect of physical activity on academic performance, extensive research on the connections between transportation and mental health is more difficult to find. Some of the most intriguing evidence includes: 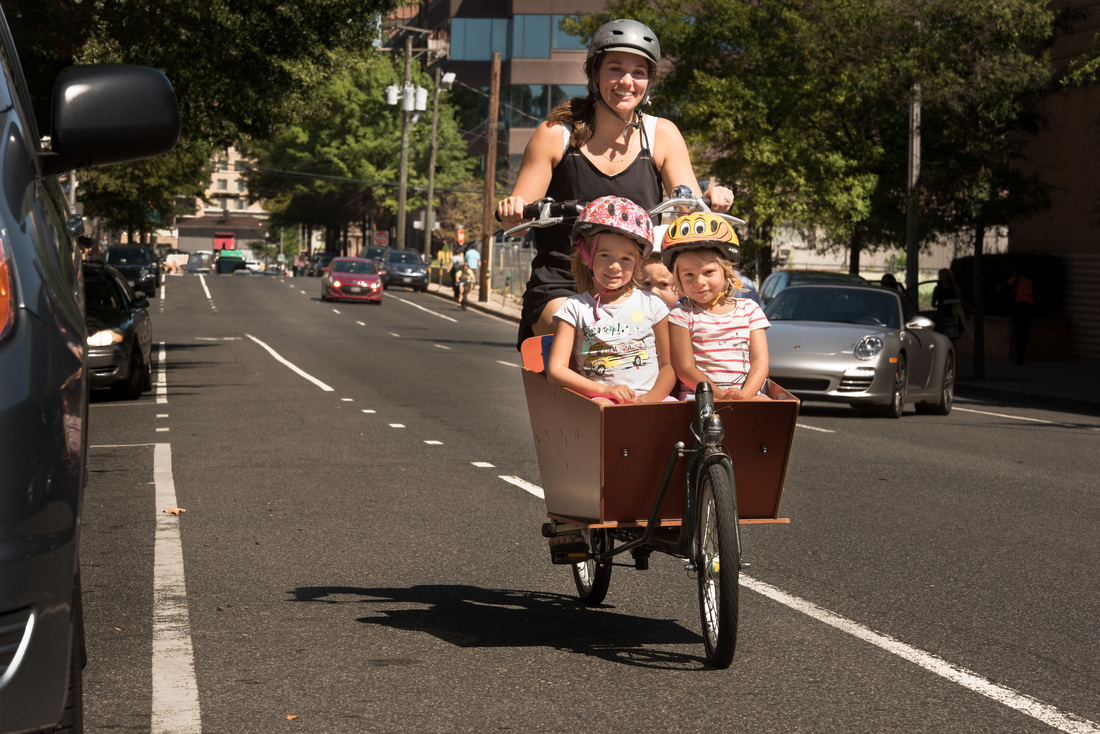 Photo credit: Sam Kittner, Mobility Lab
What should we do about it?

There are many things we can do to become more active in our travels. And one positive sign that we may get help from high up is the recent announcement that the U.S. Department of Transportation will reward $40 million (with Paul Allen’s Vulcan company pitching in an additional $10 million) to the mid-sized city that figures out how best to fix its transportation system. After all, once our crumbling and disconnected infrastructure is improved, cities can get down to the business of making it easier for people to choose the healthier, sustainable, and more productive ways of getting around town. All of this would lead to not just wealthier individuals, but wealthier communities. Cornell University found that, for one, “unwalkable communities cost Americans $190 billion a year in health-care costs.”

It all starts – or should start – at the top. And the federal government has taken at least one positive recent step. As part of its massive new Every Student Succeeds Act, children will not be prohibited from “traveling to and from school on foot or by car, bus, or bike,” as long as the parents have given permission and it’s allowed by local law. It may be sad that we actually have to write that into federal law, but it also may help bring back the good old days when kids were much more active in getting to school.

At the local and regional levels, leaders need to do something completely different than what has been done for decades: prioritize people who walk, bike, and use transit over people in cars, according to Chris Hamilton of Active Transport for Cities. He recently wrote at Mobility Lab, “If we make our streets more people-centered, and if we help make it easy for more people to walk, bike, and take transit, our cities will be more green. More prosperous. More physically healthy. And yes, more mentally healthy.”