Might beautiful places have a quantifiable impact on our wellbeing?

Chanuki Illushka Seresinhe
University of Warwick
In our everyday lives we are exposed to a wide range of outdoor settings.  Intuitively, it seems that some settings, such as a beautiful view of a calm lake, help us feel more relaxed. While others, such as a cluster of dilapidated graffiti-ridden buildings, seem to make us feel distressed or even afraid. What if the beauty of the outdoors actually has a quantifiable effect on our wellbeing? What might this mean as to how we design our future urban spaces?

Philosophers, policy-makers and urban planners have puzzled over this question for years, but have been held back by the lack of data on the beauty of our environment. Thus, to date, this discussion has been mainly centred on aspects we can measure, such as the amount of greenspace or the presence of trees  (Bratman, Daily, Levy, Gross, 2015; Bratman, Hamilton, Hahn, Daily, Gross, 2015; Mackerron & Mourato, 2013; Thompson et al., 2012; Van den Berg, Maas, Verheij & Groenewegen, 2010; White, Alcock, Wheeler & Depledge, 2013).

In our quest to understand how the beauty of the environment impacts human wellbeing, we called upon crowdsourced data from the website Scenic-Or-Not. This simple website, originally created by mySociety, asks people to rate the 'scenicness' of random images of the environment sourced from Geograph covering nearly 95% of the 1 km grid squares of Great Britain. To date we have over 1.5 million crowdsourced ratings informing us of the subjective beauty of Great Britain.

Combining this geographic scenic data with census data on people's reports of their own health has led to a remarkable finding: across the entire English dataset, we find that inhabitants of more scenic environments report better health (Seresinhe, Preis & Moat, 2015). Unquestionably, certain neighborhoods may be wealthier, have better access to services or have less air pollution; however these results hold, even after taking such crucial factors into consideration.

The definition of 'scenicness' may vary depending on the environmental context. Scenicness in the countryside is inevitably not the same as scenicness in a bustling cityscape.  As we have the ability to hone the aesthetics of the environments we build, we wanted to further understand how scenicness might impact people's wellbeing in urban and suburban environments. We found that people do indeed feel healthier even in more scenic urban and suburban environments, which implies that how we choose to design built-up areas could have a crucial impact on our wellbeing.

Our investigations continue and we have recently been given the opportunity to analyse data from the innovative iPhone app Mappiness, created by Dr George MacKerron and Dr Susana Mourato at the London School of Economics and Political Science (LSE). Mappiness polls users daily about their level of happiness, current activities and basic details about their surroundings. Exploiting these happiness ratings, MacKerron and Mourato (2013) found that people are substantially happier in green and natural environments than in urban ones.

We are exploring data from Mappiness to investigate whether people are happier and more relaxed in settings that are more scenic. While many of us would agree that spending time in outstanding natural beauty results in a feeling of general contentedness, it is difficult to intuit whether spending time in more picturesque built-up areas has a similar effect. Online data is offering us a novel opportunity to investigate this crucial question. Follow us @thoughtsymmetry and @thedatascilab for further developments on this research.

Big online datasets are helping us to quantify the link between environmental aesthetics and human wellbeing. The beauty of our everyday environment might have more practical importance than previously believed. 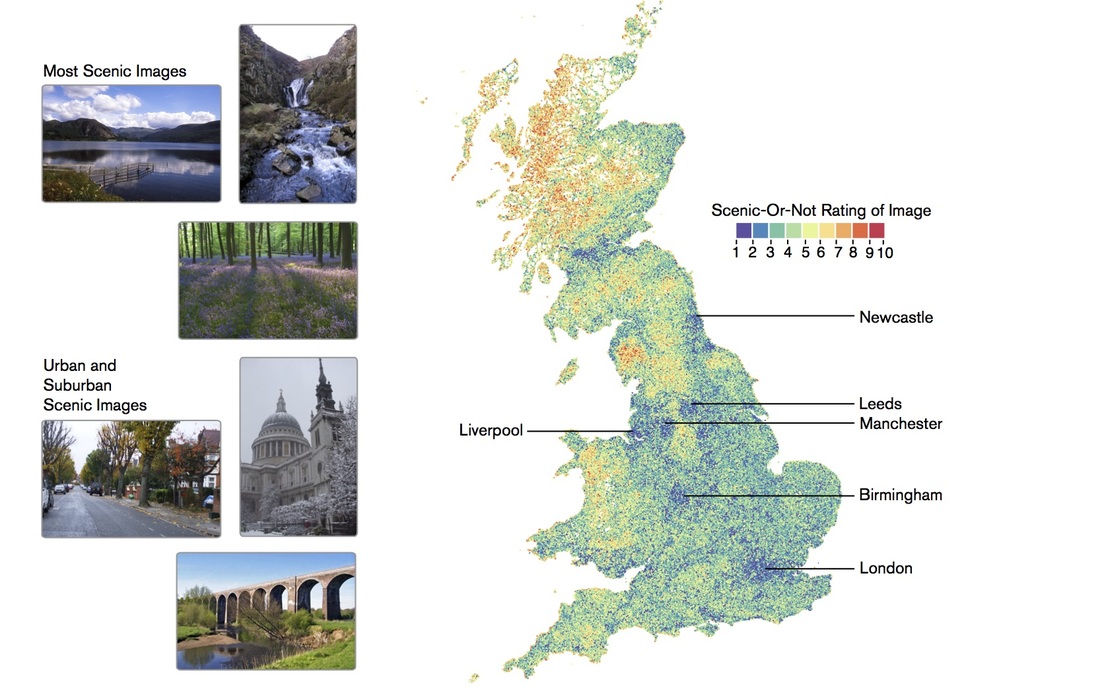 Fig 1
The Scenic-Or-Not websites gives us the novel opportunity to measure 'scenicness' all around Great Britain. We have over 1.5 millions votes rating the scenic quality of images covering nearly 95% of the 1 km grid squares of Great Britain. Each point on the  map represents one image. While the highest rated scenic images tend to be dominated by stunning natural scenery including mountains, forests and waterfalls, in urban and suburban areas, the definition of scenicness is quite varied. People not only rate natural images as scenic, but also beautiful buildings, leafy residential streets and bridges.