How do green spaces prevent cognitive decline? A call for “research-by-design”

As global lifespan increases, an increasing number of older adults with dementia are likely to age in community. In North America, this number is as high as 81% of all people with dementia (Lepore et al., 2017, p. 1). The neurobiological processes of dementia is known to start decades prior to a diagnosis (Bateman et al., 2012, Fig. 2). In other words, for every person living with dementia, two more are likely to develop dementia over the next three decades (Prince et al., 2015). As such, the neighborhood has become an important site of prevention. This perspective article provides a brief overview of research from various disciplines to encourage "research-by-design," i.e., design studios at universities with a brief to answer the research question: "How might park design prevent cognitive decline?" Exploratory design could seek to enhance the well-being of people with dementia, their care partners, and general older populations that are at-risk of cognitive decline.

Urban green spaces (UGS) have the potential to improve the well-being of older adults. Health professionals have long recognized the importance of contact with nature (Frumkin, 2001; Pryor et al., 2006). In addition to exercise and social prescriptions, recent innovations include horticultural therapy as complementary medicine (Ng et al., 2018; Maller et al., 2006; Wong et al., 2021). Landscape and urban designers have an opportunity to make neighborhoods more livable for people with dementia, and contribute to reducing 13% of its modifiable risks in late-life, namely loneliness and depression (8%), physical inactivity and diabetes (3%), and air pollution (2%) (Livingston et al., 2020, Fig. 7). These data provide helpful intermediate goals and introduce a “mechanistic” line of inquiry to research-by-design.

This paper aims to synthesize relevant evidences and generate possible mechanisms for research-by-design in community contexts. Given that research-by-design to prevent cognitive decline in community settings is an emerging field, we present here a brief narrative review with selected emphases. Our guiding criteria for selection are as follows: (1) Parsimony. The themes should be sufficiently differentiated to allow specialization while being broad enough to accommodate designers’ creativity and yield different design solutions. (2) Hierarchy. In the absence of clear and empirically validated causal mechanisms, we interrogate theories by referencing longitudinal studies, qualitative synthesis of lived experiences, and laboratory-based experiments, within the current stress-cognition paradigm (Sandi, 2013). (3) Positionality. We recognize that all research studies are conducted within specific contexts, whether disciplinary or personal, and some important perspectives may be underrepresented.

Based on our synthesis, we present the discussions that led to three potential “mechanisms” for research-by-design, under their respective thematic headings:

Recent critiques of “attention restoration” shed new light on why greenery might affect cognition, which comprise domains of memory, attention, language, visuospatial, and executive abilities for everyday functioning (Jiang et al., 2020; Joye & Dewitte, 2018). It was proposed that effortless attention to natural patterns may relief stress to aid recovery from fatigue (Kaplan & Kaplan, 1983). Instead of assuming that cognition is a depletable resource (like hard disk space), new evidence suggests that cognition is better understood in a flow state (like internet bandwidth), with stress (like background apps) taking up a significant fraction at any one time. Stress could be understood as a source of “cognitive load” and can be measured physiologically (Sandi, 2013; Woody et al., 2018). Excess cognitive load due to personal, social, and/or environmental stress affects mood and cognitive function (Berto, 2014; Jiang et al., 2020).

Many studies have repeatedly shown the cognitive benefits of simply viewing greenery, whether real and potentially accessible, or computer-generated and virtual (Jiang et al., 2020; Lin et al., 2014). In fact, it was a study on post-surgery views of trees vs. brick wall from hospital windows (Ulrich, 1984) which catalyzed on-going studies on green mechanisms to health. Evolutionary perspectives posit a “predisposition to pay attention and respond positively to natural content (e.g., vegetation, water) […] that were favorable to survival” induces positive emotions which alleviate physiological stress (Berto, 2014, p. 396).

Studies have explored the therapeutic qualities of greenery in the lives of older adults, including rural settings (Blackstock et al., 2006; Finlay et al., 2015; Williams, 2010). Views of nature reduce heart rates (Lee & Lee, 2014; South et al., 2015), possibly through a fond memory or a sense of being cared/provided for (Blackstock et al., 2006, p. 170), which distracts or resets (instead of restores) one’s attention away from stressful emotions. Such calming symbolic imaginations have been associated with green landscapes through generations (evident in cultural and planning movements; see Machor, 1987; Ruff, 2015).

At the same time, watching plants bloom, grow, and wither through the seasons could help one reappraise one’s life (Wang & MacMillan, 2013). These natural processes closely resemble the life cycle of a person, from infancy, adolescence, adulthood, to late-life. Observing and caring for plants from afar through these rhythms could instill a larger sense of life and resilience to boost confidence and esteem (Nollman, 1996). The meaning and pleasantness of such views may provide reasons to remain engaged with one’s surroundings, and exercise one’s visuospatial skills.

Playful activities
​
There is now little doubt that green spaces are important for the well-being of people living with dementia (Hernandez, 2007). Based on a review of 19 studies, Mmako and colleagues (2020) identified ways or “mechanisms” that make green spaces beneficial for the mental well-being of people at various stages of dementia, namely social identity, empowerment, and risk-taking (Mmako et al., 2020, pp. 5-7). These may be summarized as “play,” which has been associated with risk-taking (Eberle, 2014). UGS should empower people with dementia to engage in playful risk-taking and regain an identity in a community setting apart from that of a patient (Gan et al., 2021b).

Opportunities to engage in playful activities are important to people living with dementia, and may delay or prevent progression to more severe stages of dementia. They may also provide respite to care partners. Given that people with dementia may feel overly protected and stifled (Mapes, 2017), designs could put care partners at ease while creating space for people with dementia to explore and make decisions. Deducing such studio design briefs from available studies of mechanisms systematically advances dementia-friendly urban design.

To provide a focus to complex design processes and facilitate research-by-design, we provide a sketch of possible mechanisms that warrant design explorations and testing. We show here one-to-one or many-to-one relationships for simplicity but there may also be one-to-many relationships between green spaces and the intermediate goals identified by Livingston et al. (2020). For example, having green spaces for outdoor activities could reduce exposure to air pollution from vehicles and mitigate its impact. 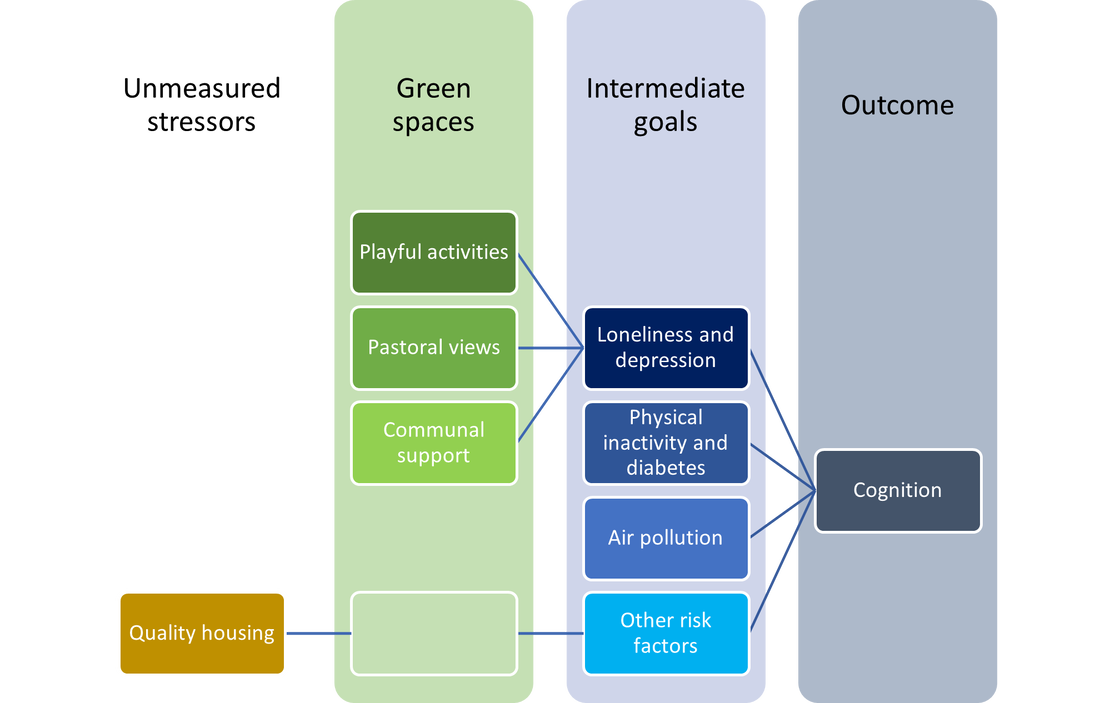 Figure 1: Possible mechanisms from green spaces to cognition for future research-by-design
We provide here a brief example of a possible application of this framework. A design studio may aim to focus on playful activities as a mechanism that may enhance cognition by reducing loneliness and depression. With reference to the cited literature and other sources, designers might aim to minimise open sides to vehicular traffic, provide lookout points with seating, while incorporating some slopes, shrubs, and planters, water, or play equipment for challenge and interest (cf. Silvia, 2008). The inputs of people with dementia, care partners, and/or other users could be sought before and after iterative ideations with maximum mutuality (Dening et al., 2020; Gan et al., 2021a). Relevant activities may differ greatly based on community inputs.
For scientific advancement, pre- and post-tests are just as important to examine the relevance of the identified mechanisms (South et al., 2015). Relevant and validated scales, including mediators such as loneliness, and/or biomarkers could be used (Ng et al., 2021; Sarabia-Cobo, 2015). Several promising wearable sensor technologies remain under development (Liu & Du, 2018). Measurement issues such as insensitive tests or stark contextual differences should be addressed (ibid.; Zijlema et al., 2017).

It is possible that land-based measures of green spaces had captured the cognitive impact of living in neighborhoods and houses of better quality despite non-exposure to greenery. Despite controlling for individual and neighborhood socioeconomic statuses (e.g., de Keijzer et al., 2018), it is not possible to negate the effects of unmeasured everyday stresses especially amid stark socioeconomic disparities and segregation (Clarke et al., 2012). For example, poor neighborhoods may be subject to police violence and/or air pollution (e.g., PM2.5, NO2) which could affect cognition through post-traumatic stress disorder (PTSD) and pulmonary inflammation/blood-brain barrier respectively (Block & Calderón-Garcidueñas, 2009; Qureshi et al., 2011). Designers should be sensitized to other possibilities, and consider other factors/mechanisms that may negatively impact cognitive health. We indicate these tentatively as “quality housing” in the diagram.

In the event that complex interventions are required, a team of experts on various sources of physiological stress or other technical experts could be consulted. But consulting the community would be most important for sustained improvements. Asset-based community development (ABCD) may be most relevant in the absence of systemic support (Blickem et al., 2018). Given that dementia affects some minority races disproportionately (Mayeda et al., 2016), supporting brain health equity through “equigenic” or place-based interventions is one way that urban designers may contribute to social justice (Loukaitou-Sideris, 2020; Mitchell et al., 2015) so long as they involve equitable labor (Duncan & Duncan, 2003) and mitigate gentrification by prioritizing the concerns of minoritized community members (Bates, 2013; Byers, 2021).

Scholars have been fascinated with the well-being benefits of the environment for centuries (Gifford, 2006). Focusing on “mechanisms” could advance dementia-friendly design practices over time. This article underscored the relevance of mechanisms for research-by-design on greenery, which has the best evidences of cognitive impact. Despite these evidences, theories that could explain its effects remain underdeveloped, which had limited their translation into practice. Design students and researchers could support theoretical development by synthesizing broader literatures and examining them through research-by-design. Studies of other urban design elements could follow a similar approach.
In short, playful activities, pastoral vision, and communal support, are three ways green spaces may prevent cognitive decline. We extended planning-oriented models of cognitive health in ways that are relevant to designers (Cerin, 2019). We invite interested designers and researchers to join the UD/MH Cognitive Interventions Workgroup.

Berto, R. (2014). The role of nature in coping with psycho-physiological stress: a literature review on restorativeness. Behavioral sciences, 4(4), 394-409.

Gan, D. R. Y., Chaudhury, H., & Rowles, G. D. (2021b). Social practices, social identity, and at-homeness while aging in the community: A comparative meta-synthesis of the geographies of home and dementia. Canadian Geographer.

Lee, H., & Waite, L. J. (2018). Cognition in context: The role of objective and subjective measures of neighborhood and household in cognitive functioning in later life. The Gerontologist, 58(1), 159-169.

Metzner, R. (1995). The psychopathology of the human-nature relationship. Ecopsychology: Restoring the earth, healing the mind, 55-67.

Sarabia-Cobo, C. M. (2015). Heart coherence: a new tool in the management of stress on professionals and family caregivers of patients with dementia. Applied psychophysiology and biofeedback, 40(2), 75-83.