Journal of Urban Design and Mental Health 2018;4:5
RETURN TO CONTENTS

Sliding towards mental health momentum at the World Economic Forum

Chris Underhill
Co-Founder, citiesRISE, UK
This year more snow fell on Davos than at any time since 1966. For two days the snowfall was so thick that I could see nothing beyond my window - but the global perspective was much clearer. Some 7 feet fell as the world's most powerful leaders in business, politics, finance and media slipped and slid through the snow into this little town to discuss, share, debate and inform on the development of human progress in a fractured world. The atmosphere was urgent as the 2018 World Economic Forum (WEF) got underway.

As a Schwab Foundation Social Entrepreneur, I was delighted to be invited to present a new idea: the concept of citiesRISE. I am co-founder of this new collective action (along with Moitreyee Sinha), which seeks to tackle the urgent need to improve mental health through collective action in major cities that will catalyze systemic change across sectors. My task was to present citiesRISE to an attentive crowd comprising the Schwab Foundation Social Entrepreneur community and other WEF communities, including the Young Global Leaders and Global Shapers.

Come what may the Davos town authorities are not great believers in clearing snow and ice from the pavements so it was with a certain combination of dread and fascination that I sallied forth with my “crampons” attached to give my talk. The council says that it wants the town to look like a “winter wonderland” which is a stretch as folk tumble left and right in the effort to get from the overfull hotels to the very well-guarded secure zone.

I was made to feel really welcome as I talked of the global population of whom 54% already live in urban areas , set to rise to 66-70% by 2050. I cited the social pressure of the populations inbound to cities, the question of overcrowding and the need to find work in a very competitive atmosphere. We expect around 6% of people in any population to be depressed, and 12% have any mental disorder (depression, but also anxiety disorders, psychosis, bipolar disorder and schizophrenia) at any given time. As triggers increase for developing mental illness in these growing urban populations, this incidence may exceed current predictions and we would begin to see higher incidences of mental ill health in urban areas.

The solution I suggested was not to depend on one model of care but to rally the whole city (smaller cities being easier to rally than megacities) to collective action. After all, if we depend on current models of treatment we are bound to find that most mental health care is delivered vertically with patients attending “the clinic” etc. Rather than invent a new model of care why not construct a new way of caring? So, encourage the care pathway to move sideways into other interstices of the city.

How? By constructing a collective action led by key figures, for example the mayor or a non-governmental organization leader, but in the end a collection of folk who represent the different nooks and crannies of the place. As these groups form and come together so the different entities that they represent become part of the pattern of care, of rehabilitation, showing that a grand coalition of people when pulling together can do a good best.

Who might take part in this grand coalition? Anyone from the first responder who goes to the scene of an incident and who, after training, can recognise that the behavior she is seeing is mental ill health, no more, no less, to the social housing provider who rises to the occasion of homelessness and poverty that are deeply exacerbating the manifestation of mental ill health, recognising that once housed, the affected person may after time feel able to better face their predicament and seek long lasting treatment. All parts of the city need to “lean in” as the multi-stake holder initiative takes shape and formal and informal actors play their part.

I was delighted that not only this presentation was welcomed but that I was able to speak at other events throughout WEF talking about well-being and mental health. In fact I co-moderated a session called “Let's talk about mental health” along with a young global shaper from the West Coast of the United States who had origins in Korea. We even were able to welcome the Queen of Belgium to this session who made points from her background in psychology and her passion for the realization of the SDGs.

I was conscious too of the other events taking place in the wider meeting space that is the WEF. I was stunned at how much of the discussion topics might well affect the mental health of people in cities. Not surprisingly there is much thinking about the city: the wealth generation of big urban conurbations, the sheer scale of cities and city building and the pull of a big city were all ideas developed at this year's WEF. This was reflected in some of the resources developed: the banner across the WEF website read: Here are five predictions for the future of our cities, and WEF's Future of Urban Development and Services initiative published its own white paper: Collaboration in Cities: From Sharing to ‘Sharing Economy .  Reasonably this paper postulates an urban future where the sharing of resources are imagined to a level which feels, to my middle class mind, quite intrusive but still, helpfully, the paper demystifies the new sharing economy vocabulary, explains key drivers for sharing, and the opportunities for cities to engage and drive sharing practices. It also explores how cities can leverage the potential of the sharing economy in use of municipal goods, spaces, and civic assets such as the talents and skills of city residents. The report covers case studies from 10 cities around the world where sharing, it purports, is already transforming the lives of citizens, including Seattle, London, New York, Melbourne, Sao Paulo, Kigali (the Capital of Rwanda), Seoul, Amsterdam, Barcelona and Kamaishi (Japan).

At the committee meeting of the Future of Urban Development and Services I introduced my own bee in my bonnet: the question of good mental health systems via collective action in the city of tomorrow - but starting today. It was interesting to see that we had been beaten to the pass by another group with an interest in diabetes and its management. Not surprisingly I was struck by the thought that what we suggested as a useful systemic approach to mental illness could also be applied to diabetes, ischaemic heart disease and most of the non-communicable diseases. Once you see potential through the eyes of another interest group it is easy to see the solutions for your own concerns writ if not large then at least differently and this is very useful and very much in the WEF tradition. The possibility of “seeing” mental health solutions via the conduit of “sharing” or climate change or education or manufacturing were all in front of me as I trod warily over the ice-laden streets of Davos. As we at citiesRISE go forwards seeking partners in collective action in Chennai, Nairobi, King County Seattle, Bogota, a city on the West Coast of the States, etc, we need to resort to the time-honoured community development tropes of listening and understanding local societies whilst resisting the urge to come forward to “solve" local problems”. For, mental health management at a systems level is the business of those who live in the city above all else. If we attempt cheap and over-structured solutions that are out of the hands of local actors we will assuredly slip and fall over on our backsides just like the keen folk struggling along the main street of the little town of Davos going to their next lecture.

After two days of snowfall so thick that I could see nothing beyond my window at the Kinder Hotel in Davos, on the third day I was astonished to see one of the biggest mountains looming over us which had just not been visible. Perhaps this was a metaphor for my time at WEF: after the snow fell, some of the challenges and opportunities for collective action for mental health in cities started to be revealed. From slipping and sliding, we can now move forward and really start to gain momentum. 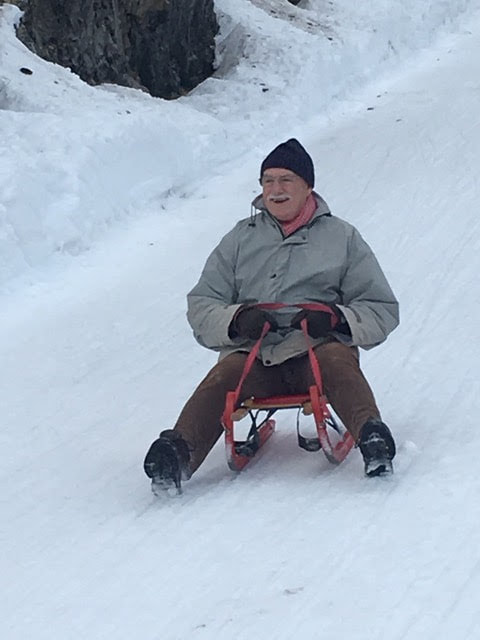 RETURN TO CONTENTS
Powered by